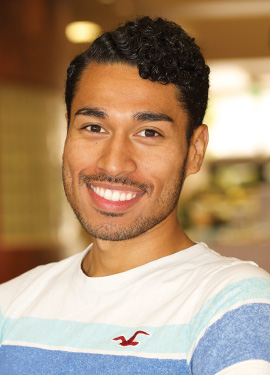 Ala Tiatia dreams of one day performing on Broadway. Originally from the small town of Ridgecrest, California, Tiatia wanted to attend American Musical and Dramatic Academy (AMDA) in New York after high school, but couldn’t afford the tuition.

Instead, he moved to Oceanside and enrolled at MiraCosta College, where he has thrived.

“Coming from a background where I didn’t have anything, scholarships have been such a blessing” said Tiatia. “They’ve helped with my basic needs so that I can thoroughly focus on my dreams.”

The last time anyone saw Tiatia on stage was as Robert, the tap-dancing groom-to-be in MiraCosta College’s spring 2015 musical, The Drowsy Chaperone.

The full-time dramatic arts theatre major, Tiatia is heavily involved in MiraCosta’s Theatre Department as well as the Music and Dance departments. He has appeared in numerous vocal jazz shows, dance performances, plays and musicals while still finding the time to serve as a student ambassador. With a busy schedule, Tiatia needs all the help he can get to keep his focus on school. He continuously applies for scholarships and says anything he earns has been a tremendous blessing.

“MiraCosta College has been great! I’m really glad I came here first instead of New York,” said Tiatia. “I feel very blessed to be here and the college has given me all the resources I need to have a successful career on Broadway.”

He has transferred to CSU Fullerton to earn a B.A. in Fine Arts.