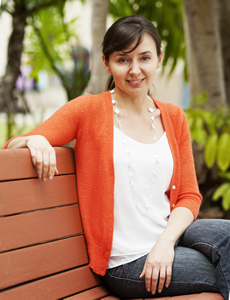 Talk about an odyssey. Born under Communist rule in Poland, Alina O’Tool witnessed the rise of the Solidarity movement, the country’s first free elections and its transition to democracy. Then she moved to Germany and married an American before she and her husband spent stints in Switzerland, India and England prior to moving to North County.

Her life really changed when the mother of two enrolled at MiraCosta College.

“When I went to my first class, I was so scared. I said to myself, `I want to go back home.’ But the professors helped me so much, the people were so supportive. They gave me confidence. I learned that if you do the work, they will not let you fail.”

Not only did O’Tool not fail, she thrived. Recently named to the Phi Theta Kappa Honor Society’s All-California Team, O’Tool graduated in May 2014 and transferred to a University of California campus in the fall with a 4.0 grade point average. She is studying human development with an eye toward earning a Ph.D.

O’Tool was the only MiraCosta College student to earn All-California Academic 1st Team honors for 2014 and was one of only a handful from San Diego County. Selection is based on grades, leadership and community service. “These 76 students represent some of the best of the 2 million students enrolled in California’s 112 community colleges,” states Phi Theta Kappa.

O’Tool said she enrolled at MiraCosta College two years ago with one goal in mind: improve her English.

“The only English I knew was from talking to my husband,” O’Tool said. “I couldn’t help my children with their homework. I was working at a Target, and I said this was not what I wanted to do with my life.”

O’Tool said she was planning to enroll in ESL classes at MiraCosta College’s Community Learning Center. But after taking an assessment test, she learned she had qualified to enroll immediately at MiraCosta’s Oceanside Campus as a full-fledged college student. She took ESL classes there, instead, while also studying to earn her associate of arts degree.

“Alina is one of the best students I've had in the almost 20 years I've been teaching at MiraCosta,” said philosophy professor Isabel Luengo. “She is very intelligent and hard-working, and has an enthusiasm for learning that is contagious to the rest of the class. She is very reflective, and very quick in her thinking. In addition, she has the most pleasant personality and a great sense of humor. I know that she will excel on any academic path she chooses.”

O’Tool, who travelled the world because her husband was a contract worker in the telecommunications industry, said she hasn’t settled on a specific career. And she concedes her English could still use some work. But her accomplishments have reinforced a long-held belief.

“If you work hard and you believe in yourself, and if you have people around you who are supporting you and believe in you, you can do anything.”