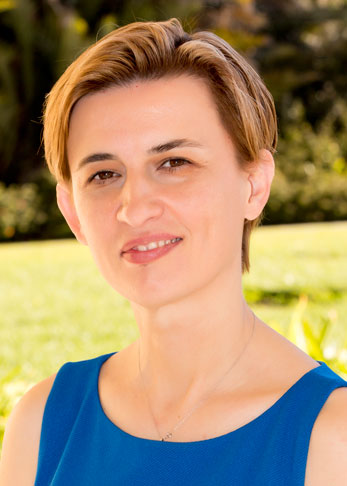 Alketa Wojcik first came to MiraCosta College as an international student. Now, more than twenty-two years after leaving Albania, Alketa is the Vice President of Student Services, where she works closely with students, staff and faculty on programs that enhance thousands of lives each year.

“Growing up in Albania, I never thought I would be able to go to college,” explains Alketa.

That changed when Alketa’s aunt hosted an American who came to Albania to train school principals. He was so impressed with how Alketa was teaching herself to speak English that he suggested she study in the United States. One day after graduating from high school, Alketa was on a plane to San Diego.

When she came to MiraCosta, Alketa strengthened her English skills by taking English as a Second Language and reading classes. Soon, she became a student ambassador and began expanding her field of study.

“It took me a while to realize I could take whatever classes I wanted! In Albania, if the government said you took math, then you took math. One day I realized, ‘Hey, it doesn’t work that way here!  I can choose whatever I want.’”

After that Alketa kept herself busy with a variety of classes, maintaining a high GPA and continuing her involvement with student leadership. Once she graduated from MiraCosta, she transferred to Cal State San Marcos where she earned a bachelor’s degree in business and a minor in Spanish. Later, she earned a master’s degree in leadership in postsecondary education from San Diego State University, and a doctorate degree from University of California, San Diego.

In 1999, Alketa returned to MiraCosta when she was hired as the student services coordinator.

After serving for four years as associate dean of Student Services at San Elijo Campus, in 2009, went on to serve as the dean of Behavioral Sciences, History and Community Education and the Site Administrator for the Community Learning Center, where she worked tirelessly to ensure that MiraCosta students have the best possible college experience.