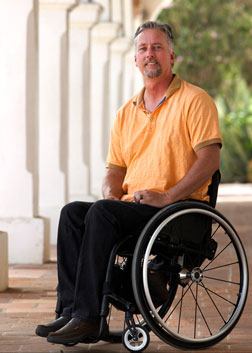 After graduating from high school, Dr. Brad Byrom became the first person in his family to attend college when he enrolled at a Texas community college.

A couple of years later, Brad and his family moved to Southern California where he continued his education at Long Beach City College.

“I completed my general education and transferred to Cal State Long Beach,” said Brad. “I was a journalism major and after I graduated, I couldn’t find any jobs in the field.”

Brad settled for working in sales but after a year he decided to go back to earn a master’s degree.

“I have always been interested in history so I decided to go back to school to get my master’s degree and teach,” said Brad. “Since I was coming from a communication background, it was easy to transition to history because research-wise, they are similar.”

After earning a master’s degree in history from Cal State Long Beach, Brad could not find any full-time teaching positions.

“After that happened, I decided to keep going and earn a doctoral degree so I could maximize my chances of getting a teaching job,” said Brad.

In 1996 Brad was accepted with a full fellowship to University of Iowa’s history doctoral program. He earned his doctorate degree then taught at Cerritos College and Mt. San Antonio College as an associate faculty. A couple of years later, he was hired as a full-time faculty member at Yuba College in Marysville, California.

In 2001, Brad began teaching at MiraCosta College, specializing in U.S. History and California history. In addition to teaching, Brad has served asAcademic Senate president and vice president, and is currently the college’s Faculty Assembly president.

“I have been at MiraCosta College for 14 years and it has been great,” said Brad. “I love teaching and I wouldn’t give it up for anything else.”