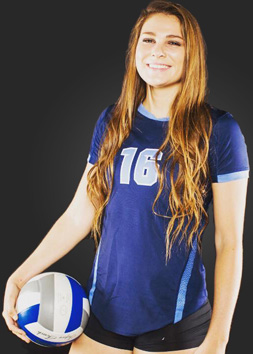 Breanna Kirklen is a force on and off the court.

Being a women’s volleyball standout earned Kirklen the Pacific Coast Athletic Conference’s Female Scholar-Athlete of the Year for 2015-16.

Kirklen is the third MiraCostan to earn the recognition in the past four years.

“I’m absolutely honored,” said Kirklen, a middle blocker who has earned a full-ride volleyball scholarship to Hope International University, a private Christian university in Fullerton. “I put a lot of emphasis on my faith and it’s awesome to see the Lord provide for me.”

Kirklen prepped at The Classical Academy High School in Escondido before enrolling at MiraCosta College two years ago. As a freshman, she was third on the team with 121 kills. This past season, she was named to the PCAC All-Conference team as an honorable mention. While at The Classical Academy, she earned the CIF Sportsmanship Award in 2013 while helping to lead her team to a CIF championship.

Kirklen, who is a regular on the President’s List, graduated one ‘B’ shy of straight ‘A’s at MiraCosta College, where she earned an associate degree in psychology.

“B.K. is a really, really, really good athlete, all-conference and all, but she also is the prototype of what a student-athlete is all about,” said MiraCosta College Athletic Director Patrick Conahan. “She is dedicated to doing her best in the classroom and she is an absolutely tremendous student. She is entirely deserving of this award and we’re just extremely fortunate to have had her as part of the MiraCosta College program.”

“I was looking for a place I could excel academically and athletically, and MiraCosta College was a perfect fit,” Kirklen said. “Pat Conahan and his coaching staff – Kristen Wright, Doug Wright – are just phenomenal. They put academics, personal growth and a person’s character first, and everything else just flows from that.”

When not studying or competing, Kirklen is busy coaching at Club NET Classic Volleyball in Escondido, at Sinjin Volleyball in Encinitas or putting in some hours at her photography business. Kirklen is aiming for a Ph.D. in psychology and working as a family counselor or marriage therapist before applying those skills in doing missionary work.

To be eligible for the Pacific Coast Athletic Conference Female Scholar Athlete of the Year award, a student-athlete must have completed at least two years at a California community college, have letters of recommendation, achieved a 3.5 grade-point average or greater, be nominated by their college and then voted on by conference athletic directors. MiraCosta College’s string of recent Pacific Coast Athletic Conference Female Scholar-Athletes of the Year include Megan Fennessy in 2012-13 and Brogan Griffin in 2014-15.