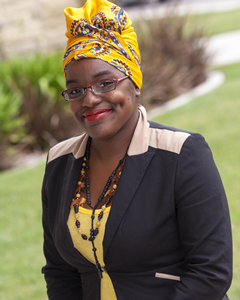 The youngest sibling of a multicultural military family, CoCo Brown is no stranger to hard times. One of her saddest moments was when her uncle passed away and her mother, his caregiver, lost her vision. Soon after, Brown and her mother became homeless and had to fend for themselves, living out of a vehicle and even becoming squatters.

Things hit rock bottom when Brown turned 17 and spent her birthday homeless. “I remember my mother keeping her head down as she cried, because she didn’t want me to see her tears, and she was ashamed and apologetic that we were homeless,” Brown said. Her mother could only find five dollars worth of coins to make a birthday meal. At that moment, Brown promised they would never be homeless and hungry again.

Brown balanced school with work, but soon found herself homeless again. At one point, she worked two full-time jobs and could not attend college. “I would read textbooks just to keep my education up to par,” Brown said.

After six months of being homeless, Brown was able to find housing again and immediately re-enrolled as a full-time MiraCosta College student. Brown went on to pursue a double major in kinesiology and and health sciences.

She had been involved in Associated Student Government (ASG) and was the Inter-Club Council chair.

“Being part of ASG has opened doors for me. I was a spokesperson for ‘All College Day’ at MiraCosta College, which has lead me to be a guest speaker to inform students about ASG and my journey as a college student,” Brown said.

Brown is a leading member of the United Brother Sister Conference, held at MiraCosta College by the Black Student Union (BSU) every spring semester, an alumnus of the Latina Leadership Network; Summer Bridge Program, a six-week, all-expense-paid program geared toward African-Americans; and the Passport Program for young adults where they can learn how to write resumes and cover letters, learn business etiquette and how to conduct themselves in interviews.

“These programs gave me something to look forward to,” Brown said. “They kept me busy so I had no reason to run the streets."

Brown believes that it is never too late to learn something. She has been part of clubs, organizations and departments on campus and continues to work within the MiraCosta College institution as well as the community.