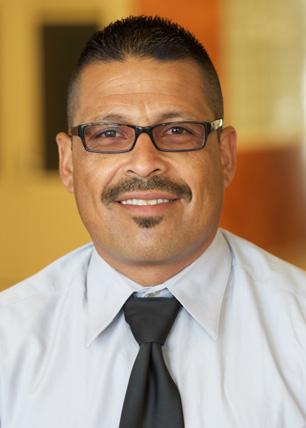 Talk about a storybook turnaround.

Overcoming a past that included drug addiction, gang ties and a decade of incarceration, Jaime Ayala Jr. is now thriving at MiraCosta College, where the former high-school dropout is excelling academically en route to his goal of earning a master’s degree for a career working with at-risk youth.

“Jaime is a perfect example of how people who have had a bad start in life can change their future,” said Diane Danielewicz, a financial aid and scholarship specialist at MiraCosta College who has worked closely with Ayala since he enrolled at the Oceanside Campus last fall. “He’s a very serious student who is making a difference in the community and has become a role model for his family and for other students.”

Ayala, a recipient of the J. Arthur & Pauline Drielsma Reentry Endowed Scholarship and whose grades landed him on the President’s List, was recently honored for his achievements at the EOPS Live the Dream dinner. EOPS, an acronym for Extended Opportunity Programs & Services, is a state-funded effort designed to recruit and support students who face economic, social, and educational disadvantages when enrolling in college.

“The counselors, school staff, and instructors at MiraCosta have impacted my life in a way that has encouraged me to pursue my educational goals with a fervor that is unquenchable,” said the 40-year-old father of three. “MiraCosta is more than a school. The staff has a way of bringing out the best in people and encouraging them in a way that helps them see their worth which in turn, helps them rise to their potential.”

Indeed, Ayala’s goal is straightforward. Securing the education and training that will help him keep countless at-risk youth from making the same mistakes he did.

Born in Oceanside and raised in Vista, Ayala’s descent began after his parents divorced when he was 13. Left alone in a home without structure, Ayala began drinking, doing drugs and hanging out with gang members. By age 14, he was committing petty crimes and burglaries. By age 16, he became a heroin addict and began going in and out of Juvenile Hall until the age of 18. In 1996, when he was 19, he was sentenced to his first prison commitment. In 2005, after serving 10 months for a parole violation, he moved in with his sister. The girl who would become his wife was living next door. She convinced him to start attending church, and he soon became a born-again Christian.

Ayala’s life hasn’t been the same since. Sober since Feb. 17, 2006, Ayala landed a job as a maintenance supervisor at Calvary Chapel Vista, where he worked for seven years. For the past three years, he’s been assigned to a Family Intervention Team with the Escondido Education COMPACT, a partnership between local schools and the Escondido Police Department aimed at reducing youth violence and building leadership and workforce skills. It was through his work with a Family Intervention Team specialist that Ayala realized he could have a greater impact and assume a leadership role with a college education.

MiraCosta College was an obvious choice.

“The people at MiraCosta made me feel welcome right off the bat,” he said. “Even though I’m an ex-felon and considered a re-entry student, I know they really want me to succeed. The EOPS program has really made an impression on me by the genuineness of the people on staff there from the bottom up. Everybody there wants me to succeed and it keeps me motivated to continue working hard.”

With a 3.7 grade point average after his freshman year, Ayala has his eyes on graduating with an associate degree in behavioral science in the fall of 2018, then transferring to Cal State San Marcos for a bachelor’s degree in human development and a master’s degree in school counseling.

“Working with at-risk youth is something I have enjoyed doing because I was once a very troubled adolescent myself and I am giving back to the community,” he said. “A college degree will increase my chances of working as a school counselor or working with incarcerated youth who need guidance, counseling and mentorship from someone who has walked the same path they are on.”