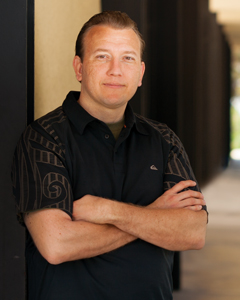 Jeremy Orosco knows how to overcome a challenge.

Raised by a single mother who moved from job to job and apartment to apartment to make ends meet, Orosco would later work an overnight shift in Santa Ana while taking a full course load at MiraCosta College.

“It was a struggle,” Orosco said.

It was a struggle that has paid off. Orosco graduated with a bachelor’s degree in mechanical engineering from UC San Diego and was later accepted in the university's Ph.D. program with a full fellowship.

“I reflect on what’s happened in my life every day, usually at night while I’m walking back to my car at school." Orosco said."And I think, 'I can't believe this is actually happening to me.' I’m honestly in disbelief."

Supporters, such as MiraCosta College English Professor Jane Mushinsky, never had a doubt.

“Jeremy is just an amazing person,” said Mushinsky, who worked with Orosco when he was president of and she faculty advisor for the Phi Theta Kappa Society at MiraCosta College. “He is really, really talented, very disciplined, doesn’t get discouraged, and he’s incredibly intelligent.”

Orosco grew up in Southern California, but never had time to set roots down in a particular community. “We were pretty broke,” Orosco said. “At some points, we were really broke. We were just trying to scrape by, moving from one place to the next.” That meant finding apartments in Riverside, Imperial Beach, Garden Grove and Westminster. At one point, Orosco’s mother, Rena Krystle, landed a job as a courier delivering documents around the region. “I’d be sitting in the car while she was ferrying documents from business to business.”

It wasn’t until she found a job with the county of Orange that Krystle and her son finally started to settle down. They decided to stay put in southern Orange County during Orosco’s teen years, enabling Orosco to graduate from Laguna Hills High School in 1998.

Over the next decade or so, Orosco worked full time. He had little interest in continuing his education. Jobs included being a supervisor in the video department at a Best Buy in Mission Viejo, helping Panasonic open a retail store in Costa Mesa, and doing a variety of duties for a mortgage company in San Clemente.

“I was seeing a girl at the time and we were thinking about moving to Oceanside,” Orosco said. “I thought I might want to go back to school and I saw MiraCosta College was there, so I checked it out and ended up enrolling. Up until that point, life was just sort of happening.”

Orosco would end up moving back to Santa Ana, but remained at MiraCosta College. He was working full time, at nights and weekends.

That didn’t keep him from excelling in school. A straight-A student, Orosco for two years served as president of MiraCosta College’s Phi Theta Kappa Honor Society and led an effort that landed the organization a Presidential Volunteer Service Award after racking up hundreds of hours cleaning up local beaches, collecting canned foods for the hungry, rehabilitating natural habitat in the area and giving away Christmas presents to homeless children in Oceanside.

“I learned quite a bit at MiraCosta College,” Orosco said. “It set me on my path.”

MiraCosta also set him up well for his years at UC San Diego.

“After my first quarter at UC San Diego, I realized I had been really well prepared,” Orosco said. “UC San Diego was not as hard as I thought it would be, and I attribute that to the education I received at MiraCosta.”

It was while he was at MiraCosta College that Orosco decided to study engineering. He says he will leave his future career plans open, but figures teaching may factor into the equation.

“I’m sure he will thrive in anything he decides to do,” said Mushinsky.