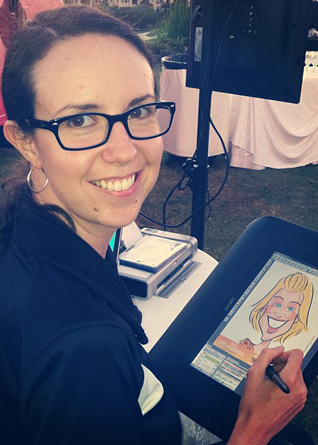 Julia Kelly was working as a part-time graphic artist when she decided she needed a change in her life and enrolled at MiraCosta College. Now she’s a successful digital caricature artist who owns and operates a flourishing, six-figure business she helped build using the skills she learned at MiraCosta.

“I love MiraCosta,” said Kelly, whose firm, JK Expressions (http://www.jkexpressions.com), has carved out a profitable niche creating caricatures at corporate events and trade shows and now contracts with 10 artists from California to Florida. “Everybody at MiraCosta College is looking out for you and has your best interests in mind.”

Her road to success had a few turns along the way. Living at the time in Vista and working in Escondido, Kelly enrolled at MiraCosta College at the age of 21 in the fall of 2010 and explored every subject she could while changing her major more than a few times. Along the way, Kelly, who had been drawing most of her life, decided in the summer after her freshman year to seek a job as a caricature artist at Legoland. “I wasn’t really that good, but they hired me anyway, and I learned a lot.”

The experience led her to strike out on her own as a freelancer drawing caricatures at birthday parties, weddings and the like. It was more of a side gig when she first started out, but it grew – quickly. A couple years later, she quit her graphic design job and focused on growing her business.

Meanwhile, she continued to flourish at MiraCosta College, where her academic achievements helped her secure scholarships to UC Berkeley, UCLA and UC San Diego. Instead, she decided to return to MiraCosta and study accounting – a decision that proved invaluable for her growing business.

“Accounting is incredibly useful when you’re running your own company,” she said. “Coming into MiraCosta, I had no clue about anything that had to do with accounting. I didn’t even know what a balance sheet was.”

Thankfully, that’s no longer the case. In 2014, JK Expressions was generating well into the six figures and building new relationships with event planners and trade shows. She raised her rates, invested in a new website, hired an administrative assistant, and began contracting out some of her work.

“It just sort of grew to become a full-time business,” she said.

Her efforts at MiraCosta College were just as successful. Kelly in 2012 won the Medal of Honor, which is sponsored by the MiraCosta College Foundation is the college’s highest academic honor. Awarded annually to only five students, each recipient receives a scholarship of at least $500 provided by businesses, community members and service organizations.

She also was active in Honors Program and participated in community college Honors Research Symposiums at UC Berkeley and UC Irvine. Her mentor was history professor Christopher Sleeper, who coordinates the Honors Program.

“Julia is one of the finest writers ever to participate in the Honors Program and I still use her work as models for instruction,” said her mentor, Christopher Sleeper. “Julia is naturally gifted with numerous academic talents but she also works harder than most, too.  The amount of hours she spent working on her conference presentation were inspiring for me and all who worked with her.”

Kelly transferred to San Diego State University in 2013 and graduated with a bachelor’s degree in accounting two years later.

“MiraCosta College helped me so much,” she said. “The instructors are very accessible; the level of attention you get is a lot different than when you go to a place like San Diego State. I really can’t say enough about it.”