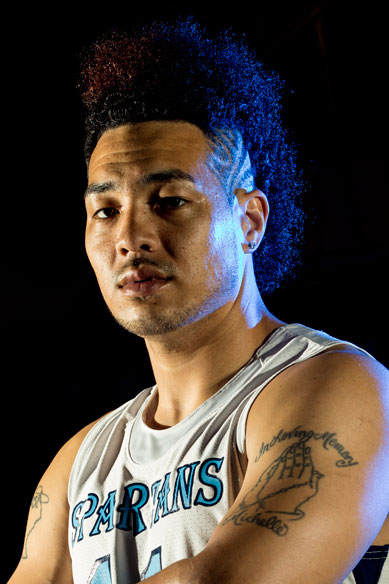 After more than two years removed from serving 10 years in the Air Force, the MiraCosta College basketball star has been named – at age 34 – to the California Community Colleges Association’s Men’s Basketball All-State team. Now he’s being recruited by four-year college programs from Alaska to Kentucky and has his eyes set firmly on playing professionally.

“It’s a pretty awesome story,” said MiraCosta College Basketball Coach Patrick Conahan, who first heard of Boyd when he stumbled upon him playing in a Camp Pendleton tournament.

“My dream was always to become a professional basketball player. Even when I was in the Air Force, I’ve never given up on that dream. And now that dream is a step closer to coming true.”

“He’s definitely talented enough to play professionally, perhaps in Europe or Asia where nearly every country has a professional basketball league,” Conahan said of the forward who averaged 21.9 points per, 8.2 rebounds and 2.8 assists per game in guiding the MiraCosta College Spartans to the playoffs in the 2015-16 season. That followed a freshman season in which Boyd was the 9th leading scorer in the state at 18.6 points per game and was voted 1st Team All-Conference and earned All-State Honorable Mention.

“He’s just a good basketball player and a tremendous scorer who has a certain toughness about him,” said Conahan.

Boyd is not the oldest college basketball player ever. Brian Rice was shooting hoops a couple years back for the Geneva College (Pennsylvania) basketball team at the age of 43 after serving two and a half decades in the Navy. And Ken Mink, another Air Force veteran, was 73 years old when he suited up for the Roane State (Tennessee) Community College Raiders in 2008.

“All I can say is I believe in myself,” said Boyd.

He’s also creating a legion of followers. Especially after dropping 41 and 42 points in a pair of games as the MiraCosta College season neared its conclusion this winter.

It’s been a circuitous route to MiraCosta.

Raised in Killeen, Texas, Boyd attended a couple community colleges before enlisting in the Air Force at the age of 20. “The school thing wasn’t working out and I wanted to try something different,” he said.

Boyd’s 10 years in the Air Force took him to San Antonio and San Angelo, Texas; Anchorage, Alaska; and Cannon Air Force Base near Clovis, N.M.; before being stationed at Kunsan Air Force Base in South Korea. It was during a tournament in Korea that Boyd, who had just shaved his head and was a little overweight, earned the nickname ‘Buddha.’

At age 31, Boyd – who was trained as an Air Force firefighter – left the military to chase his dream. His life changed while playing in a 2014 tournament at Camp Pendleton.

“I was out there to watch another player, Travell Hector, who was coming to MiraCosta and was playing in the tournament,” Conahan said. “So we were at Camp Pendleton to support Travell. And then we notice this other guy who you could tell right away was something special.”

Said Boyd: “Coach Conahan pulled me aside and told me he liked the way I played and started asking me about my background and if I was interested in playing for MiraCosta College. He took my number and called back a couple days later and said, `Hey, guess what. You still have four years of eligibility left.’ MiraCosta is military friendly, I was getting a chance to play college ball, so I enrolled that summer.”

Conahan called his actions a no-brainer.

“He’s a good person, a really good human being, he’s very good at what he does, and it’s pretty obvious to any basketball coach that he knows how to play,” Conahan said.

“I really owe Coach Conahan a lot,” Boyd said. “He believed in me since Day One. He’s done everything he could to help me succeed. He has stood by me every day. I have truly been blessed.”

In fall 2016, Boyd transferred to Bethesda Christian University in Anaheim to play for school’s men’s basketball team, the Flames.