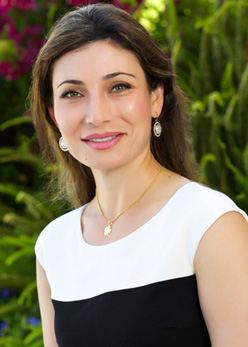 Safaralian is the brainchild behind the Bridge to Success in Math, a weeklong, pre-semester boot camp where incoming freshmen review mathematical concepts they may not have studied in years so they can improve their scores on math placement tests and avoid being stuck in remedial – or pre-transfer level – courses. The results have been remarkable. More than 95 percent of students completing Bridge to Success have improved their scores, including a large number whose improvements have enabled them to avoid remedial classes altogether.

And that is critical in keeping students from leaving school behind. Study after study shows students placed in pre-transfer level courses are far more likely to walk away from their education, frustrated at what they see as being forced to take classes that add more time, more money and more roadblocks toward earning a degree.

Safaralian highlighted the program in a dissertation leading to her a doctor of education in educational leadership this past June from UC San Diego.

What prompted her to launch the Bridge to Success in Math?

“I was teaching a pre-transfer math class, and the students were thriving,” said Safaralian, who now serves as the program’s coordinator. “They were answering the questions with no problem and it was clear they understood the concepts. So I started asking why they were in this course. And many told me they had taken algebra, calculus, even AP math classes in high school, but they hadn’t brushed up on their skills before taking their placement tests and simply were not prepared. It was clear all they needed was a short refresher and they could have avoided taking a class they didn’t need.”

Safaralian worked with the late-Lisa Menuck, then a MiraCosta College testing specialist, and others in developing Bridge to Success. The program was instituted in the summer of 2014. Since then, more than 550 students have taken part in the free weeklong workshop, and almost all of them have improved their test scores on placement exams, enabling them to avoid remedial courses. In January of 2016 alone, 87 of 90 students boosted their scores on math placement exams.

Luis Hernandez is among the students who have benefitted.

“I had not been in a classroom in five years due to serving in the United States Marine Corps and in that time forgot a good amount of my math skills, but the bridge program was able to bring it all back and give me the knowledge I needed to succeed,” he wrote in a testimonial posted on the program’s webpage.

For Safaralian, Bridge to Success validates her decision to become a professor. Her epiphany came when Safaralian, an Iranian immigrant who had earned a bachelor’s degree in economics, enrolled at Palomar College after moving to the North County more than 20 years ago. Because she was excelling in the class, a calculus instructor asked Safaralian to work as a math tutor. “I realized I really enjoyed teaching,” she said. “I decided this is what I wanted to do. I want to become a math teacher.”

Safaralian transferred to Cal State San Marcos, where she earned a master’s degree in mathematics. That was followed by part-time teaching jobs at Cal State San Marcos and MiraCosta and Palomar colleges. She was hired as a full-time instructor at MiraCosta in 2013. A year later, she launched Bridge to Success in Math.

“We’re quite proud of the Bridge to Success in Math program,” said Mike Fino, MiraCosta College’s Dean of Math and Sciences. “It has, objectively, had a positive impact on many students in meeting their educational requirements in math but it’s also been a boon for their self-confidence. We’ve found that these students will even out perform their peers in the college-level coursework that they get placed into. However, second to the celebration of our student successes is the recognition of what is possible when you have dedicated and talented faculty that challenge norms and identify innovations. There is tremendous value to the experience that comes from the front lines of teaching and learning and our faculty are true leaders in these kinds of higher education reforms. Dr. Safaralian represents the best of us.”

“MiraCosta has so many great programs and services that are in place to provide our students with a wonderful educational journey,” Safaralian said. “Everything we offer here is amazing and all faculty, administrators and staff are working toward one goal: to help students set and reach their goals.”