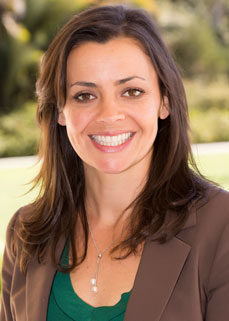 Melanie Haynie’s original plan was to move to New York, attend NYU and be a big, ritzy financial analyst.

All that changed when she enrolled at MiraCosta College.

At the age of eight, Melanie and her family moved to the United States from Germany and began a new life in San Diego County.

While in high school, Melanie knew she would not be able to afford four-year university and decided to attend a community college.

“I ended up enrolling at Palomar and the application process there didn’t go smoothly,” said Melanie.

Thankfully, one of her friends was scheduled to take a placement test at MiraCosta College and asked her to come along.

“I didn’t even know where or what MiraCosta was,” said Melanie. “I ended up going with her to campus and after we took our tests I saw how beautiful the campus is, plus the staff were very friendly and helpful the whole time.”

This experience motivated Melanie to enroll at MiraCosta.

Melanie worked at the college as a student worker and became a member of student government. After a couple of semesters, Melanie rethought her future.

“Jim Gonzales, who was the ASG adviser, made his job look really fun and exciting,” said Melanie. “So, I decided instead of becoming a financial analyst, I would stay in education.”

“Throughout my time at MiraCosta, Baradat was the professor who really stood out to me,” said Melanie. “So for graduation, I chose him to be the one to present my diploma when students could pick a faculty or staff member to hand them their diploma.”

In spring 2000, Melanie earned an associate’s degree in economics, transferred to UC San Diego and became a permanent employee at MiraCosta.

“I chose to earn a master’s degree in higher education leadership in hopes of going down the path of getting into student services and working directly with students,” said Melanie.

Today, Melanie is the MiraCosta College student center manager/club and organization advocate and works closely with student club leaders and Inter-Club Council (ICC) representatives, acts as the adviser for the ICC leadership group and manages the student center.

“There’s a lot to do to keep the student center running, but it’s fun and keeps my day exciting,” said Melanie. “It’s also a rewarding experience working with students because you get to talk to them, see what they’re going through and get to help them with any issue or be part of their excitement when they’re having a great day.”

One day, Melanie hopes to go back to school, earn a doctorate and go into administration. Right now, though, she really loves what she is doing.

“People here are so incredibly friendly and genuinely care about students and their success. That is one of many reasons I chose to stay at MiraCosta College and hopefully retire from one day.”