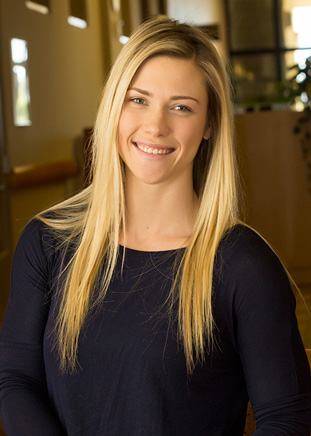 Taylor Barry was set to attend Sonoma State University in the fall of 2010 after graduating from Oceanside’s El Camino High School – until she had a sudden change of heart. She ended up going to MiraCosta College instead.

Good thing. An academic standout, Taylor – who recently married and changed her surname to Moss – found her passion at MiraCosta, where she worked as a student ambassador before transferring to UC San Diego and graduating with a bachelor’s degree in biology. Now she’s manufacturing pharmaceuticals at Genentech, a leading Bay Area-based biotechnology company with offices in Oceanside.

Born and raised in Oceanside, Taylor originally had her sights set on Sonoma State, where she was going to study nursing. “Then, about two weeks before I was going to move up north, I changed my mind. It just didn’t feel right. So, I went to MiraCosta, and the college made it really easy to enroll. The faculty and staff made me feel at home, helped me set up an education plan, and I was ready to go.”

It soon became clear that MiraCosta College was a wise choice.

“The faculty is just amazing,” said Taylor. “They’re connected to the students. The class sizes are small, and the students are motivated. It was a great experience for me.”

Taylor used her enthusiasm to fuel her passion as an effective student ambassador.

“Taylor Barry was selected to represent MiraCosta College in our schools and the community because she was a role model to others around her, solid academically, and displayed leadership skills,” said Lisa Montes, MiraCosta College’s School Relations/Diversity Outreach Specialist. “She is articulate, resourceful, personable and continues to make MiraCosta College proud. I am excited to know she has since graduated from UCSD and is working for a local biotechnology company.”

In fact, it was while she was attending MiraCosta that Taylor was inspired by a biology instructor and opted to change her major and career goals. She graduated with an associate of arts degree with an emphasis in math and science before enrolling at UC San Diego. She found the job at Genentech – where she works as a contractor – shortly after securing her bachelor’s degree in 2015.

“I love what I’m doing,” she said. “It’s a very team-oriented company. I’m working with some very intelligent people and learning a lot. I have a lot to be thankful for.”