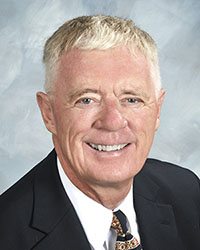 George McNeil joined the MiraCosta College Board of Trustees in December 2008, representing Area 5, which is southern Oceanside.

George was born in Scotland and emigrated with his parents to the United States when he was 16. He earned a Bachelor of Science degree in Physics from Villanova University and taught for two years in Catholic high schools. After becoming a United States citizen, George worked for thirty years as a teacher, counselor, and administrator in a public school system in suburban Philadelphia. During that time, he earned a Masters of Arts degree in Counseling from Villanova and numerous certifications from other universities.

George married his wife, Maggie, in 1962 and they have six children. So far they have twenty-one grandchildren. Although all of the children have their own homes, four cats and a dog help to fill the McNeil household at this time.

After George retired, he and Maggie moved to San Diego where he worked for a Jewish private school as a teacher and administrator for five years. Once George retired for the second time, they moved to Oceanside and have lived here for over seven years.

George has always been active in community affairs and youth sports wherever he has lived. In Oceanside, he is the Chairman of the Manufactured Home Fair Practices Commission, Treasurer of the Montego Home Owners Association, Vice-President and School Director of Temple Etz Rimon, and is a member of the El Corazon Oversight Committee.

George is particularly proud of the work done by the El Corazon Planning Committee, of which he was Vice-Chair, which took an issue that had badly split Oceanside and after two years of prodigious community outreach and intensive study developed a comprehensive plan that has met with overwhelming approval.

George is honored to have the opportunity to contribute to MiraCosta College, an exemplary school that meets the needs of a vibrant and diverse community.