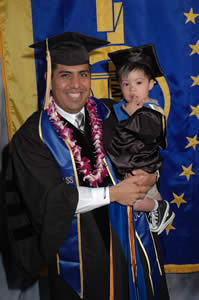 MiraCosta College 2002 graduate. Distinguished recipient of the UC Dissertation-Year Fellowship. Author and co-author of numerous research publications on nanowire arrays and quantum dots. Respected scientist in the field of solar energy, nanoelectronics and photovoltaics. Dr. Alfredo A. Martinez-Morales has traveled far and accomplished much since leaving his distant homeland of Oaxaca, Mexico, as a teenager.

“Although life was comfortable for my family when I was young, living in Oaxaca, my mother saw greater opportunity in the United States,” says Alfredo. “My insightful mother wanted my brother and I to have the opportunity for an education…she said she ‘wanted us to have careers,’ so she left us with my grandmother in Mexico while she made the difficult trip to California to pave the way for our new lives.”

Four years later, when Alfredo was just 14 years old he and his brother left Mexico, traveling 2,300 miles to join their mother in Oceanside. “We left our worlds behind. I was just entering high school when we arrived in Oceanside.”

Today, more than two decades after he sat in his first ESL class at MiraCosta College’s Community Learning Center, Alfredo has a bright career in the field of solar energy, working as a Research Faculty and Managing Director of the Southern California Research Initiative for Solar Energy at the Bourns College of Engineering at UC Riverside, where he leads six undergraduate students and three graduate students.

Alfredo attributes much of his current success to the “wonderful and enriching experiences at MiraCosta College,” and to the dedicated professors and mentors at the college, including his ESL instructor and the winner of the 2011 Hayward Award for Excellence in Education, Sylvia Ramirez. “Throughout my education and career path, I have been fortunate to have the support and care of people like Sylvia Ramirez, my ESL instructor, who made a true difference in my academic experience. I truly appreciate everything she did.”

Sylvia, whose advice to her ESL students is, “follow your dreams and believe in yourself,” says she remembers Alfredo well. “Alfredo was such an inspiration to me,” she says. “High school is hard for most young adults and when you add the insecurities of not knowing the dominant culture and language, it can be overwhelming. But Alfredo was a star in my ESL classes; I always thought he would have a bright future.”

Alfredo also looks back on his experiences in the MiraCosta College PUENTE Project as a defining moment in his life. “Professor Jara’s class was challenging, stimulating and gave me the confidence to pursue and finish my academic goals.” Not surprisingly, Alfredo wants to give back to the community that helped him on his path to academic success and is actively pursuing an opportunity to mentor a young student in the PUENTE Project at MiraCosta College.

“It is time for me to give back some of the kindness and generosity that I received,” says Alfredo. “Because of my struggles and my deeply felt experiences, I feel stronger. I am the person I am today because of them.”