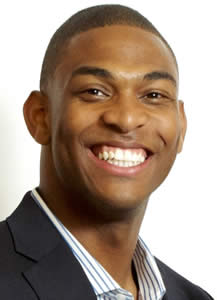 Antoine Stevens-Phillips was settling into a career as a political consultant when he enrolled at MiraCosta College on the advice of an uncle. No surprise, then, that he quickly rose to become vice president of legislative affairs for the Associated Student Government.

“Being at MiraCosta College has been an amazing experience and will play an instrumental role in helping me reach my goals,” said the Detroit native, who is the first in his family to go to college and eventually plans on enrolling in law school. “There are so many resources here and so many people willing to help.”

Stevens-Phillips was taking classes at Wayne State University in Detroit upon graduating from high school, but had to drop out as a freshman due to a lack of financial aid. The fact that he wasn’t serious about his education at the time didn’t help.

“Throughout high school, I did what I had to do to pass,” Stevens-Phillips said.

But Stevens-Phillips has a gregarious personality, and friends helped him land a job for a Detroit consulting firm where clients included the longtime congressman, Rep. John Conyers. Work would later take him to Massachusetts and Washington, D.C., before he moved to California to lobby local lawmakers and state legislators.

While living in Los Angeles two years ago, his uncle suggested Stevens-Phillips go back to school.

“He told me about MiraCosta College, which was where he went to college,” Stevens-Phillips said. “He was living in Oceanside at the time and I was staying in L.A., so I came down and had a look and eventually enrolled. I’m glad I did. It feels like family here.”

To say that Stevens-Phillips has been a success at MiraCosta College would be an understatement. Besides his work with ASG, he has a 3.9 grade-point average, is deeply involved in the Honors Program, belongs to the Phi Theta Kappa Society and serves as a consultant in the Writing Center at the Oceanside Campus.

“Antoine embodies the very best of MiraCosta College students,” said Chancellor, Los Angeles Community College District Dr. Francisco Rodriguez. “He has earned the respect of faculty, staff and other students with his focus on success, determination, and eagerness to learn and try new things. His bright smile and persistent optimism is infectious.”

Stevens-Phillips speaks just as highly about Dr. Rodriguez. “He has really inspired me. He spoke to me about his family and his experiences and how his grandfather was a farmer who told him that you only get out of life what you put into it. That has really stuck with me.”

Being involved in student government has helped show Stevens-Phillips how special MiraCosta College is.

“I interact with my peers at colleges all across the state and many of them tell me they feel like they’re just a number where they are. You don’t feel that way at MiraCosta. The professors, the faculty, the staff, the counselors they are all here to help guarantee your success.”

Stevens-Phillips was accepted to all of the universities he applied to, including UC San Diego, UCLA, and UC Berkeley.