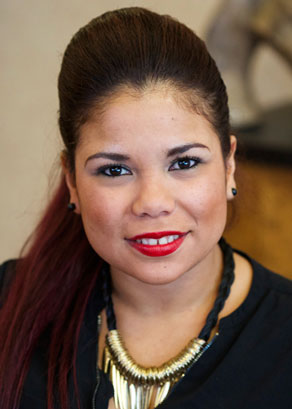 Returning student Juliana Rico has a great reason for leaving Colombia to study in the United States. She wants to be a journalist.

With fifty dollars in her pocket and a Basic English vocabulary, Rico left Colombia in 2009 after acquiring a work visa from a student international work and travel program.

“My parents thought I was crazy,” said Rico. “My family is well-off in Colombia, but I knew I wouldn’t be able to get the necessary education and experience I needed to become a great journalist because unfortunately, a career in journalism in Colombia is difficult and very dangerous.”

Shortly after arriving in Las Vegas, Rico lost her paperwork, which resulted in her not being able to apply for a job for a month. She succumbed to living a frugal life, sometimes not eating to save money and sleeping on the floor at a friend’s place since she could not afford rent.

Frustrated, Rico sought to find help at a Colombian restaurant where the owner tried to soothe her frustration.

“I remember I walked into the restaurant crying like a baby,” said Rico. “The restaurant owner was very helpful and offered to call my parents in Colombia so I could get financial help until my paperwork went through again.”

At that very moment, a Colombian journalist dining at the restaurant overheard Rico’s cries. Their interaction changed her life forever.

“This man was apparently listening the whole time and later asked me about my skills and what I liked to do,” said Rico. “I told him my passion was writing and when I did, he told me a friend of his worked for a newspaper in Vegas and told me exactly what I needed to do to apply. It was a very eye-opening conversation.”

When Rico was finally able to work, she got a job as a writer for a Las Vegas-based Spanish newspaper, El Tiempo. After 18 months, Rico thought it was time for her to go back to school.

After learning the Las Vegas educational system did not suit her academic goals, she looked into moving to California. She learned community colleges offered free classes and with that thought in mind and one hundred dollars in her pocket, Rico moved to North County San Diego.

Not long after, she began attending free noncredit ESL classes at the MiraCosta College Community Learning Center. In 2012, she enrolled as a full-time credit student at the Oceanside Campus.

“MiraCosta College has been so great to me,” said Rico. “These past few years I have been able to really find myself and get my confidence back. For the longest time, I didn’t believe I could do it, but everyone here at the college proved me wrong and now, I know I can do anything.”

Today, Rico is thriving. She has a 3.89 GPA and is on her way to graduating with two associate degrees in English and political science. She has also received numerous scholarships, which have helped her with basic needs.

Professionally, Rico has worked for a number of newspapers including The Press of San Diego, Vida Latina en Oceanside, La Prensa, and Enlace (Union-Tribune Spanish Newspaper).

Rico plans on one day earning a graduate degree in journalism from Columbia University and focusing her career writing about controversial social issues, specifically in the Latino community. Her ultimate dream is to win a Pulitzer Prize in journalism.

“I want to be a voice for the Latinos,” said Rico. “I want my writing to bring good to society and break down barriers. It is a difficult career, but I am committed and up for the challenge. I am not afraid.”